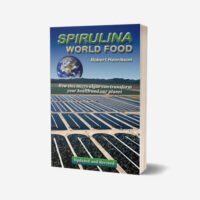 The complete guide to a powerful food that can help rebuild our health and restore our environment.

Want a discount? Become a member by purchasing Spirulina Network Premium Membership - 4 Calculators + Extras, or log in if you are a member.
Category: Spirulina Grow Guides

The complete guide to a powerful food that can help rebuild our health and restore our environment.

Once a food of the future, now millions of health conscious people around the world are enjoying this powerful food packed with unusual phytonutrients, antioxidants and functional nutrients with proven health benefits. This 3.6 billion year old algae designed by nature can help restore our personal and planetary health.

A green business entrepreneur, Robert Henrikson has been instrumental in developing algae as a world food resource for over 30 years.

He served as President of a major algae food company and founder and director of the world’s largest spirulina farm.

He developed Earthrise Spirulina brand products in the USA and 30 countries.

His book “Earth Food Spirulina”, originally published in 1989 has been translated into 6 international editions and revised seven times. He has been eating five grams a day of this green food for 30 years, about as long as anyone.

This site uses Akismet to reduce spam. Learn how your comment data is processed.